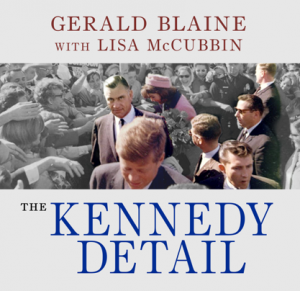 I have been listening to quite a few audio books while travelling from Evans Head to Casino each work day. I have listened to eAudiobooks on BorrowBox as well as the Library’s audiobook collection on CD and MP3.

I recently listened to a very interesting audiobook – “The Kennedy Detail” by Gerald Blaine and Lisa McCubbin. This is a fascinating story of the Secret Service Agents responsible for looking after President John F. Kennedy and his wife Jackie Kennedy.

The story includes the critical events leading up to and following the assassination of JFK in Dallas on 22 November 1963. The story is told by the Secret Service agents who were there. The Kennedy Detail talks about other motorcades, the relationship between JFK and Jackie and the Secret Service.

I found the story quite moving particularly the days after the assassination and as a result I watched a Youtube clip of a Sixty Minutes interview (years after the assassination) of Clint Hill who jumped on the back of the presidential car after the shots were fired. His interview is amazing and very emotional where he states that everyday he lives with the thoughts that if he had acted quicker he could have sacrificed his life for the President’s. All these give a great insight into the thoughts of the Secret Service and their admiration for President Kennedy.

Anyone who believes there was a second gunman on the grassy knoll will be disappointed as the Secret Service believe there was only Lee Harvey Oswald. It is also interesting to note that many years later one of the Secret Service Agents went to the Texas School Book Depository and to the exact location Lee Harvey Oswald was set up and saw that there was nothing they could have done – everything was in Oswald’s favour.

I highly recommend The Kennedy Detail and will now try and track down the movie which came out in 2010.

The Kennedy Detail is available from the library.