Book review by Gary Ellem – The Battle of Long Tan

The battle of Long Tan by Peter FitzSimons 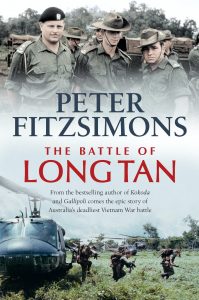 This is another great historical book by Peter Fitzsimons about the famous battle for Australian troops in Vietnam on 18 August 1966.  I didn’t have a great deal of knowledge about the Battle of Long Tan though I had watched the movie “Danger Close: The Battle of Long Tan”. Having now read this book and now knowing a bit more about the soldiers involved I will watch the movie again.

Peter Fitzsimons has been able to bring to life the personal stories of the men who fought and the events leading up to that memorable battle. This is something that he does very well with all his books.

As I was reading the books and getting to know each soldier, I bookmarked the pages at the back of the book under the title “Lest we forget” to see if they were one of the soldiers killed in the battle. 18 soldiers were killed in the Battle of Long Tan with their ages ranging from 19-22 years. Some has enlisted in the army while others were conscripted.

This was another great read and gave a great insight into the deadliest battle for Australian forces in Vietnam.