Under Section 162 of the Roads Act 1993, and Part Two of the Roads Regulation 2018, notice is hereby given that Richmond Valley Council, as roads authority, proposes to name the following roads: 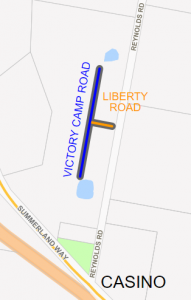 The names Victory Camp and Liberty provide a rich history theme being acknowledgement of the Dutch internment camp for Indonesian nationalists during WWII, which was located across the road from this estate in the lawn cemetery and subsequently a number of buildings were relocated to the industrial estate site. The internment camp became known as Victory Camp. Liberty being the “liberation” of acknowledgement of the war.

Any person may make a written submission by addressing them to the General Manager via one of the following methods: