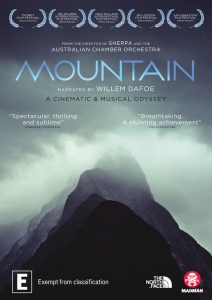 Reserve this DVD now or watch on Beamafilm

This awe-inspiring documentary film, based on the award-winning book “Mountains of the Mind” by Robert MacFarlane, is a collaboration between German adventure cinematographer Renan Ozturk, Australian film director Jennifer Peedom, Richard Tognetti and the Australian Chamber Orchestra, and narrated by American actor Willem Dafoe.

Helicopters, Drones, and Go-Pros were employed to capture the magnificent images across many countries including Australia, New Zealand, Tibet and Antarctica. This enabled the film makers to present panoramic perspectives that are truly breath-taking to behold.

As well as the majesty of the mountain peaks and landscapes, we are treated to the spectacle of various mountain adventurers, including rock climbers, ice climbers, downhill skiers, parachuting mountain-bike riders, and people donned in wing suits, all risking life and limb in pursuit of their particular thrill or goal.

I have no desire to ever experience any of these pursuits myself, but it is certainly thrilling and awe-inspiring to watch these undertakings, especially in such magnificent surroundings.

As well as showcasing extreme heights and extreme sports, with the aid of historical footage the film also touches on the history of mankind’s efforts to conquer mother nature by attempting to climb her highest peaks.

Importantly, the film also poses questions about the impacts that mankind is now having on these mountainous landscapes through tourism and commercialisation and the sheer volumes of numbers of people traversing these once pristine places.

The music of the Australian Chamber Orchestra beautifully and dramatically accompanies the narration by Willem Dafoe and the stunning visuals.

Described as a “cinematic and musical odyssey” I recommend this film to nature lovers, adventurers, and those who, like me, are adventurers-at-heart-but who prefer to experience it from their lounge room.