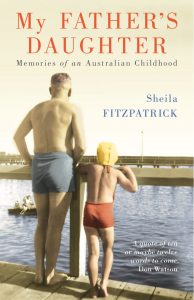 My Father’s Daughter: Memories of an Australian Childhood by Sheila Fitzpatrick

Sheila Fitzpatrick’s memoir begins in Oxford in 1965 where Sheila is a graduate student disappointed not to be going to the Soviet Union for a year of research in the field in which she would like to specialise. She receives a telegram telling her of the unexpected death back in Australia of her father ‘the person who loved me most, the person who loved me no matter what’ but she realises that he is part of the past she had repudiated when she left Australia. He had taught her from an early age to probe and challenge authority; in her adolescence she had begun to question him. Her father was Brian Fitzpatrick, civil libertarian, journalist, radical historian, ‘a controversial and even notorious figure in his day, which was the 1940s and 1950s’. The memoir is thus not only a personal story but a social and political history of Australia.

The Afterword deals with her time in Russia and briefly with her career, including twenty years in the USA with the Cold War as a backdrop, up to the 1990s when, she says, ‘I became a senior and respectable figure in the field’. It is a fascinating story. Don Watson called it ‘a gem of a memoir’ and praised its intelligence and candour. Recommended.

She goes back to tell the story of her childhood and the important people in her life but particularly her father. He taught her from an early age to probe and challenge authority but in her adolescence she began to question him and she realises that he is part of the past she repudiated when she left Australia.

I enjoyed it immensely for the personal stories and also the social and political history it covers.