Book review by Ruth Mogg – How Good is Scott Morrison? 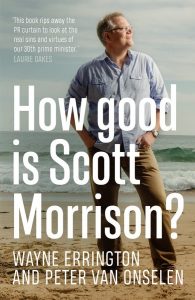 How Good Is Scott Morrison? by Wayne Errington and Peter van Onselen.

The authors of How Good Is Scott Morrison? (324.29405), Wayne Errington and Peter van Onselen, expect that the subject of their book will become our fourth longest serving prime minister.  The book investigates his unlikely rise to the top job, his electoral success, and his leadership since then.  It analyses in some depth his approach to issues. There is very little about his background, for example, how he became a Pentecostalist as an adult, having previously been Presbyterian. They do note that Pentecostals are the religious group in Australia ‘least likely to accept the science of climate change’ but this is not examined to any great degree.  The book does not reveal very much about his values and I do not know a lot more about him than I did before reading it although it is revealing on his close political allies.  Still, it is interesting to read the analysis of two writers with academic backgrounds who no doubt try to be objective and  are aware of the crucial role prime ministers play in Australian life.