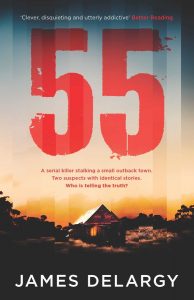 The story also includes a dysfunctional relationship between two cops who were previously best mates.

I did start reading this book awhile ago but was interrupted because I had to read the new Harlan Coben and the latest book in the Orphan X series by Gregg Hurwitz (highly recommend this series). I am glad I went back to finish it – I enjoyed it. There is a little bit of Wolf Creek to the story and it was interesting trying to work who was telling the truth.

A quick check of the library catalogue and I notice we have a new book by James Delargy called Vanished which I hope to read soon.