Audiobook review by Corinne Hughes – When the Corn is Waist High

When the corn is waist high – written by Jeremy Scott, read by Thom Rivera 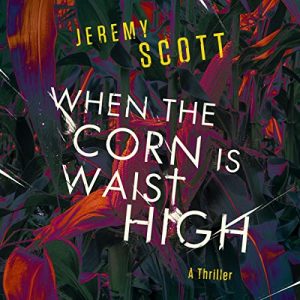 This mystery gives an insight into 1980’s American culture of the poor corn crop growing states around Indiana. It also lets you peek into the lives of a close-knit, small community clinging to their Catholic faith, local Priest Father Lancaster and Church community for hope in tough times and worse the grip of the unknown.  The community is being preyed upon by a serial killer.  If this is not unusual enough things start getting very strange when we’re introduced to the local Catholic Priest and all round down-to-earth good guy– he’s not only this community’s main spiritual leader but he’s also the local Police Chief and Sheriff.  Father/Police Chief Sheriff Solomon Lancaster is there for everyone and no one wants to solve this crime more than him as deals with a weak Mayor who doesn’t want the expense of calling for loaner-Police re-enforcements from neighbouring towns or the bad PR from calling the FBI for help.  As the ritualistically mutilated bodies of the some of the most charitable folk are found curfews are placed and Father/Sheriff Lancaster thinks he knows who the murderer is but no one’s listening.  As the killer gets closer the twists get more and more incredible and you just want it to STOP!  I’m not going to spoil it for you but I’ll add that I found it very strange but I had to keep listening.