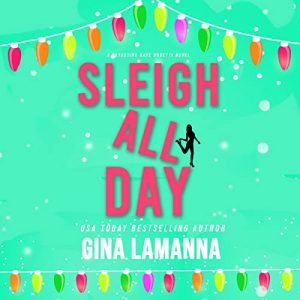 Sleigh all day is from the Detective Kate Rosetti mystery series.  This is a Christmas murder mystery which revolves about Kate’s New York Italian Police family.  Kate’s long time estranged father Angelo has been released from prison and is now back in her, her sister’s and Mum’s life & home.  Once a celebrated New York Detective, Angelo Rosetti did the unthinkable and skimmed a chunk of cash before submitting the balance as evidence seized from a Police sting of a local drug-Lord.  All her life Kate has had to live down her father’s good-cop-gone-bad sins to rise to the rank of lead Detective in the very same Police force.  And now the seemingly random senseless drive-by shooting of a man doing his weekly shop at local deli in Kate’s own neighbourhood coincides with the mysterious disappearance of Angelo.  At first Kate ignores her Mum’s pleas to investigate Angelo’s disappearance.  Kate’s suspicious Police mind tells her crims like Angelo never change they’re self-centred and undependable; plus Kate just can’t forgive the father she adored who abandoned his family by turning bad so she dismisses Angelo’s disappearance.   However, no matter how Kate tries to separately unravel the murder the two cases collide.   Now Kate’s family and friends fall under closer scrutiny as they’re drawn more and more into the mystery.