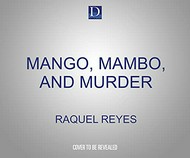 A first book from Reyes in her Caribbean Kitchen Mystery series.  I really enjoyed so much about this book.  Reyes wrote well, the main characters were likable, the ‘mean girls’ were very mean, the mystery was clever, and most of all I loved the Cuban-Dominican Republic cultural references.

In brief Miriam Quinones-Smith is a gorgeous, young Cuban-American lady originally from Miami, but late of New York where she studied and met fab husband Robert.  Miriam is a  food anthropologist and Robert an eco-civil engineer and they’ve come home to Robert’s family stronghold of Coral Shores Miami to start afresh with son Manuelo.  At first Miriam feels out of place discovering Robert’s family are one of the wealthiest, most influential founding families of Choral Shores until she re-connects with family, friends, the Cuban community and wins a job on a Cuban daytime TV show as a ‘Span-glish’ cook/influencer.  Miriam reluctantly attends a whose-who event – the “Coral Shores Women’s Lunch” – with childhood friend, now savvy realtor Alma. While trying to be polite about not eating the horrible lunch the ladies witness the shocking death of Sunny Weatherman.  Everyone assumes poor Sunny died from heart failure because of past of addictions and her latest fad (drinking Cuban weight-loss teas), but soon Detective Pullman is on the scene and declares murder. When uber-fit, Yoga instructor Gabrielle dies Detective Pullman notices Miriam again and enlists her help as his eyes and ears in both Cuban and American communities.

I look forward to reading the next Caribbean Kitchen Mystery.