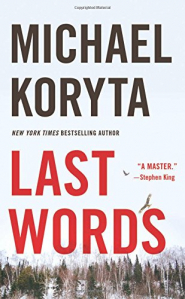 Whoa! What a compelling read. If you like a thriller with a subtle paranormal twist and you’re ok with small, dark, enclosed, underground spaces this is the mystery for you.  Even though I diametrically avoid small, dark, enclosed spaces in all life situations and much of the story is set in a fictitious massive, un-mapped cave system called Trap Door and describes in paralysing detail the ‘rapture’ of the dark, fear of being lost or unable to move in an enclosed space I found I couldn’t stop reading the book no matter how I felt till I reached the end. It’s so intriguing I can hardly wait to read the next instalment in the Markus Novak series. 5 Stars.

The story revolves about the tragic story of Markus Novak. Mark and wife Lauren are partners in friend Jeff London’s foundation Innocence Inc.  The foundation works to test and attempt to over-turn many hundreds of America’s innocent death row prisoner’s convictions. Suddenly Mark’s life is shattered when Lauren is senselessly murdered as she goes to investigate a lead in a new case from a psychic witness who Mark should have been meeting but wouldn’t because of his prejudice of the paranormal.  Everything Mark thought he understood now turns 360.  Jeff London sends Mark as far away as possible to Garrison to pull himself together.  Jeff tasks Mark to investigate the 10 year-old cold case murder of teen Sarah Martin at the request of chief suspect Ridley Barnes.  It’s highly strange for an unconvicted murder suspect to request an investigation to prove their innocence or guilt, but Ridley has lost all quality of life because of continued suspicions in his home town. Mark just wants to discover what happened to his wife and leave Garrison asap until he discovers paranormal connections to Lauren’s death. From day one in Garrison Mark’s  been lied to, threatened, beaten-up, imprisoned and interrogated by local Police, abducted, drugged and thrown down the deepest most dangerous cave to die by unknown murder suspects all because he’s getting too close to bringing dark truths into the light.  Mark is now more determined than ever to solve Sarah’s murder.  Ridley’s search for the truth has seen him seek help from a therapeutic hypnotist to recover his lost memories. To learn the final truth Ridley knows he must return to where it all began –  the depths of Trap Door.  Ridley’s recovered memories help Mark unlock the tragic truth about Sarah’s fate but the extreme experience of being in Trap Door once again forces Mark to confront his own darkest fears and learn to listen to that sixth sense that’s always been there to keep him safe and might now lead him to solve Lauren’s murder.